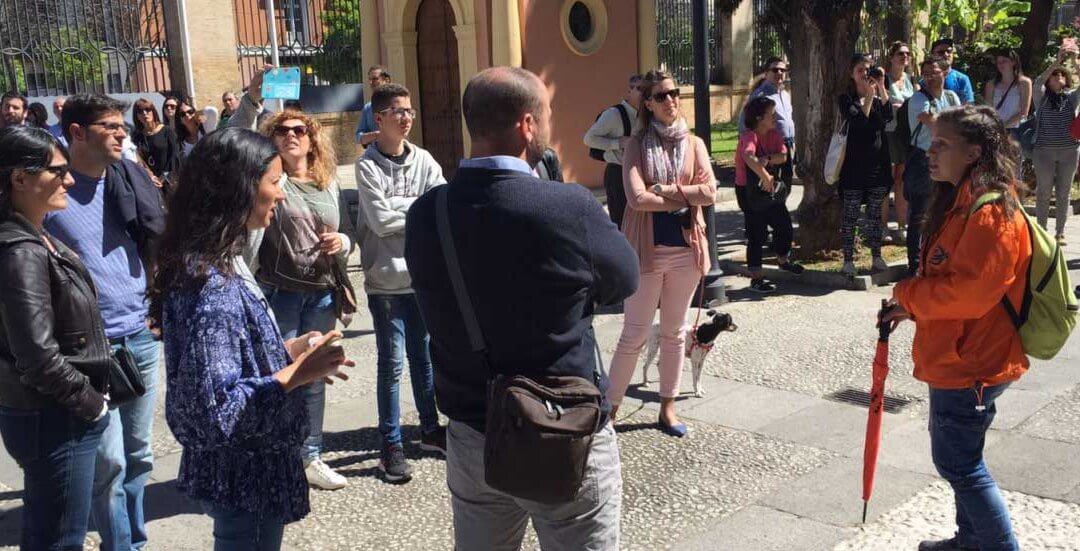 Why are the Monument Tours free? Because you choose the value!

365 days a year (under rain or sunshine)

Our Monument Free Walking Tours are mostly about the history of Spain and Seville since 1492 until now.

In 1503 Seville was chosen by Isabel and Fernando, ‘the Catholic monarchs’ as the incoming port with the monopoly of all the ‘Indian’ products with the construction of the ‘House of Trade’.

Seville lives as the biggest and richest city the Golden Age of Spain.

Monuments Free Tour in Seville. Cathedral & Giralda (only outside)

Palacio de San Telmo
Beautiful baroque construction from 1680s, formerly a famous school of sailors
Then house of the noble Montpensier family, and nowadays the presidency of Andalucia

Tobacco Factory and University
When built in 1770s it was the 1st tobacco factory in Europe and the biggest building in Spain by square meters, now the 3rd one
Famous for being the place where the story of George Bizet’s Carmen, a very famous Opera, was inspired. More that 8.000 gipsy girls used to come across from Triana, the other side of the river, to work here every day. Carmen (ficticious character) was one
Site of the University of Seville.

MarÍa Luisa Park
Huge public garden, formerly private for the nobelty
With many tropical plants and species of birds

Plaza de España
The highlight of this tour!
One of the most impressive builings you ll ever see in your life!
An open-air Enciclopedia for the history of Spain, and a hidden offense to the Catalan’s identity
Built for a very important World Fair in 1929

Lunch all together (optional)
World Heritage
The biggest christian temple in the world at the time of its construction
It contains the official tomb of Christopher Columbus (5 more places claim to have one, too!).
Its tower, formerly a minaret, used to be the highest tower in the world in the 12th century!!
It’s the southern gate of Seville’s city center. Inside and around the fountain is where Spanyards celebrate when the national football team wins!

Queen Cristina gardens
Lunch all together: optional, the most fun and interactive part of our tour
We´ll taste typical Tapas

Want to book in advance to guarantee that you’ll be there?

Book Direct on our Site

Activities and Things to do by City